Urinary casts are tiny cylindrical, tube-shaped particles that can be found during the microscopic examination of urine. Casts are the only elements found in the urinary sediment that are unique to the kidney. Tamm-Horsfall mucoprotein (uromodulin) secreted by renal tubular epithelial cells is believed to form the basic matrix of all casts. Any elements present in the tubular filtrate, including cells, bacteria, granules, pigments and crystals may become embedded to the cast matrix to form variety of casts. Different types of casts found in urine sediment represent different physiologic and clinical conditions.Urinary casts can be divided into two main categories; Cellular casts and Acellular casts. Hyaline cast is a type of acellular cast.

Hyaline casts are the most commonly occurring casts in urine. They are composed almost entirely of Tamm-Horsfall mucoprotein. They have smooth texture and a very low refractive index, similar to that of urine in which they are suspended. They appear colorless and almost invisible under bright field microscope and have parallel sides and rounded ends. Occasional granular inclusions may be present in the matrix. 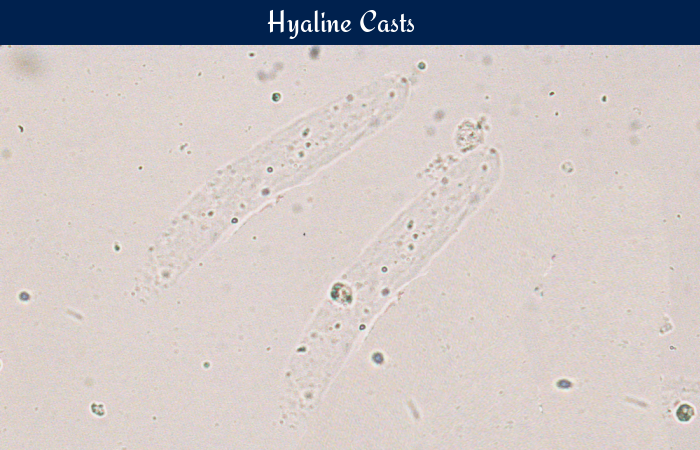 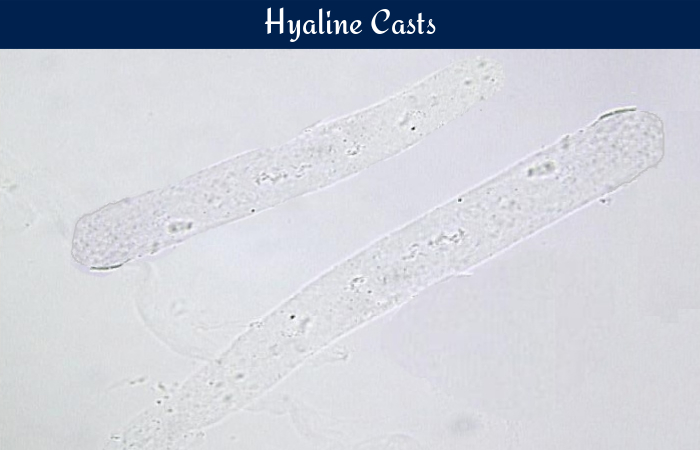 The presence of 0-2 hyaline casts per LPF is considered normal. Some physiological and pathological conditions are associated with increased amount of hyaline casts in urine.

Increased amounts of hyaline casts are usually associated with:

Pathologically, increased amount of hyaline casts are usually associated with