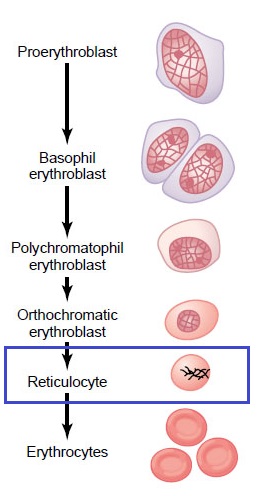 Reticulocytes are immature red blood cells (RBCs) with considerable quantities of ribosomal and mitochondrial RNA. Normally, there are a small number of reticulocytes in the peripheral blood which remain for 24-48 hours during maturation.
Reticulocyte count is the test for determinigg bone marrow function and evaluating erythropoietic activity. It is used to classify and moniter therapy for anemias. Reticulocyte number increases when there is an increase in erythropoietic activity.

The reticulocyte count is based on the property of ribosomal RNA to react with isotonic solution of a supravital stain such as New methylene blue or brilliant cresyl blue. Supravital stains are those which stain living material. Hence, for the detection of ribosomal RNA is reticulocytes, they should be fixed.
Blood is mixed with the stain and incubated. The RNA in the cell gets precipitated as dark blue network or reticulum. Blood smear is made and examined under microscope. As a direct count is not possible, a relative count is taken against the number of RBcs and expressed as the percentage of RBC. 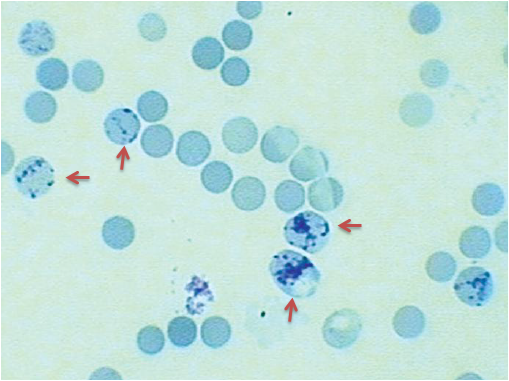 This is the percentage of reticulocytes per 1000 RBCs.

The absolute reticulocyte count (ARC) is the actual number of reticulocytes in 1 L of whole blood.

In specimens with a low hematocrit, the percentage of reticulocytes may be falsely elevated because whole blood contains fewer RBCs. A correction factor is used, with the average normal hematocrit considered to be 45%.