Coagulase is an enzyme that works in conjugation with normal plasma components to convert fibrinogen to finbrin and causes clotting of plasma. This enzyme is a good indicator of pathogenic potential of Staphylococcus aureus. As 97% of the strains of S. aureus have proven to be coagulase positive, the Coagulse test is useful for differentiating S. aureus from other Gram positive, Catalase positive cocci.

It is also known as clumping factor. It is attached to bacterial cell wall and reacts directly with fibrinogen. This is shown by formation of visible mass. it doesn’t require coagulase reacting factor (CRF).

It is an extracellular enzyme (released from the cell). It converts fibrinogen to fibrin by activity of coagulase reacting factor (CRF) in plasma. This is detected by appearance of fibrin clot in the tube coagulase test. It is usaually recommended to do tube coagulase test on all ‘slide-coagulase-negative’ staphylococci.

Slide Coagulase Test: The formation of clumps within 10-15 seconds is positive test result. Saline and plasma mixture should show no clumping.

Tube Coagulase Test: A positive coagulase test is represented by any degree of clotting, from a loose clot suspended in plasma to a solid clot. If negative, the plasma remains a liquid. 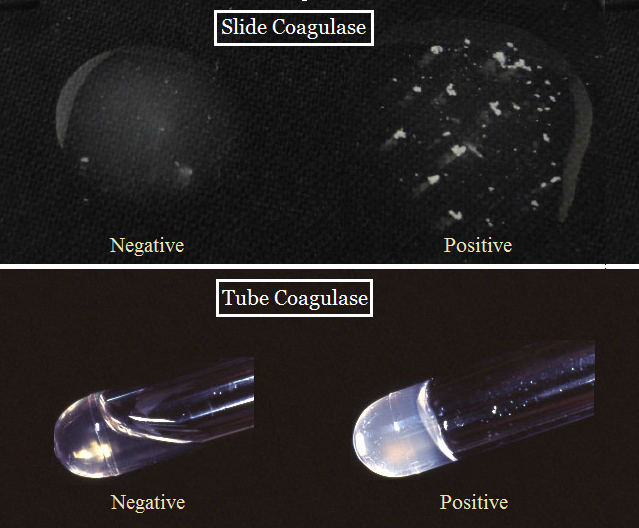