The Arneth count is the determination of the percentage distribution of different types of neutrophils on the basis of their nuclear lobes. It is not commonly used in modern medicine. Joseph Arneth classified neutrophils into following five types.

The staging of neutrophils is based on the degree of maturity. The younger neutrophils contain fewer nuclear lobes than the older ones. The neutrophils enter the bloodstream mostly as bilobed cells, but the number of lobes increase to 5 or more by the end of their short life span of 8-10 hours.

Neutrophils are grouped into different types (N1, N2, N3, N4 and N5) on the basis of nucelar lobes by examining a stained smear under oil-immersion objective. In case of difficulty in determing nuclear lobes, two other parameters can be considered to stage the neutrophils. 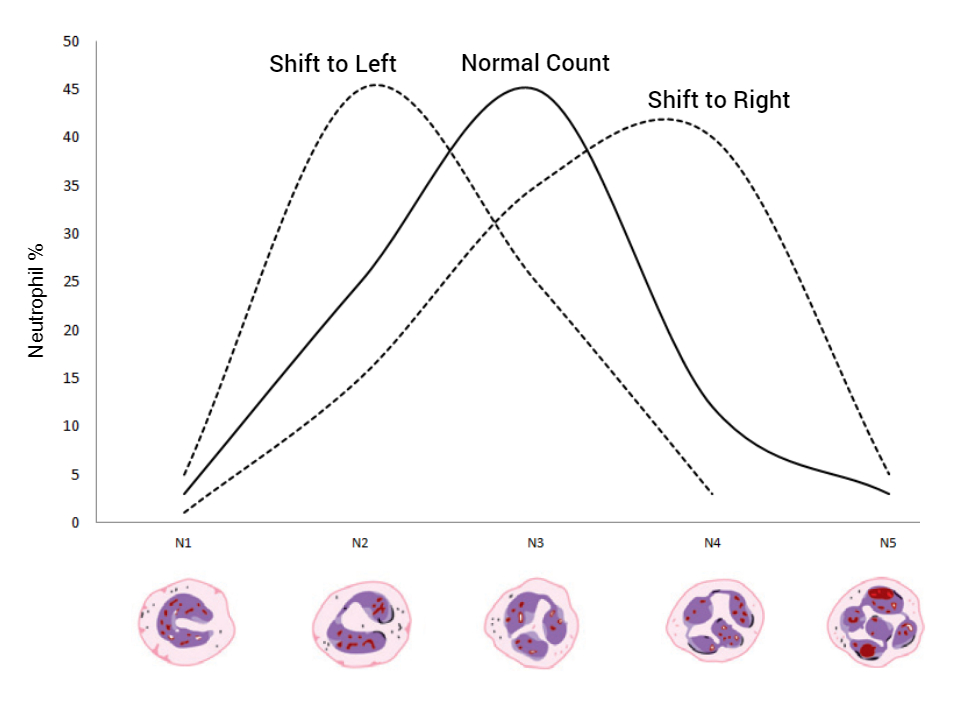 The Arneth count is used to determine the number of younger or older neutrophils in the cirulation. As it reveals the production of neutrophils, it indirectly reflects the activity of the bone marrow. When there are more younger cells in circulation, the change is called shift to left and when there are more older cells in the circulation, the change is called shift to right.

The total cells counted in N1, N2 and N3 are more than 80%. It indicates that bone marrow is hyperactive. Because left shift occurs due to increased production of cells, this is also called regenerative shift. Conditions related to this are:

The total cells counted in N4 and N5 are more than 20%. It indicates that bone marrow is hypoactive. Because right shift occurs due to hypofunction of bone marrow, this is also called degenerative shift. Conditions related to this are: